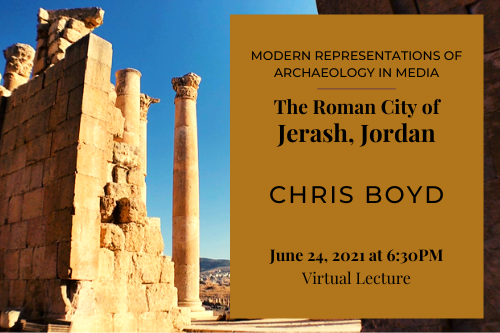 Documentary filmmaker Chris Boyd presents considerations on how archaeological material and concepts are presented to the general public through popular media, using an ongoing restoration project in Jerash, Jordan as a case study. Boyd discusses his background, and how he oriented his career toward independent film projects that cover archaeological topics. In highlighting his work in Jordan in 2019 for a joint archaeological project sponsored by the US State Department, Chris presents ways in which modern media — most importantly, short-form documentary work distributed online — is a crucial tool for disseminating academic archaeological work and educating the general public about its cultural value. Chris also considers ways in which archaeological projects around the world must utilize media as part of the new “Public Archaeology” focus, to maintain relevance in government policy-making and secure international funding. This event will be held on Zoom and is limited to 100 attendees.

Proceeds from our Living Room Lecture series help fund the care of Center collections and virtual programs for all ages. Your contributions provide critical support as the Center had been closed to the public for almost a year. 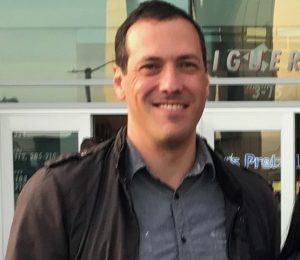 Chris Boyd is a native of San Diego, California and attended film school at the University of Southern California, where he graduated with his B.F.A. in Writing for Screen and Television. In 2010, he completed an MA in Archaeology at Durham University in the UK. He found his first job in major feature film production in 2011 as a Production Assistant on Sherlock Holmes: A Game of Shadows for Warner Bros. in London. In the ensuing years, he worked as an Assistant to Producers as well as an Associate Producer on feature films and television shows in the UK, Budapest, and South America. Concurrently, he pursued non-fiction projects: his debut feature documentary, The First Padres, was acquired by PBS and won an Emmy Award. His next feature, Black’s Beach, was also acquired by PBS in 2018. He has produced short-form documentary work in Canada, Thailand, and Jordan, and in 2019 he produced the short documentary Layers: The Photography of Hadi Saleh, directed by Bita Shafipour and currently screening at the Los Angeles County Museum of Art. As a working screenwriter, he has written feature screenplays for Sony, Lionsgate, and Warner Bros. Studios. In 2020, he was a credited writer on the Sundance Film Festival feature Charm City Kings, alongside Oscar winner Barry Jenkins. That film was acquired by HBO Max for wide release. Chris resides in San Diego, where he works as a writer and develops documentary projects.

Registration closes at 4 PM on June 24.