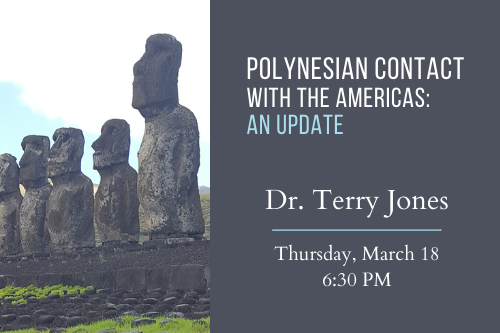 The possibility of prehistoric Polynesian contact with the Americas has been considered by historians, archaeologists, and other scholars for centuries. Most evidence and most scholarly discourse have focused on South America, but as early as the 1930s, Alfred Kroeber suggested that cultural similarities between southern California and Oceania could be the product of prehistoric trans-oceanic diffusion. In this talk, Dr. Terry Jones will review archaeological, linguistic, and other evidence for such contact in North and South America with an emphasis on recent genetic studies that challenge some longstanding ideas. This event will be held on Zoom and is limited to 100 attendees. 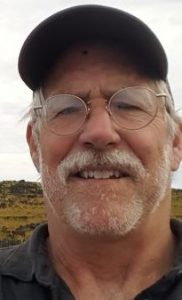 Dr. Jones joined the Cal Poly San Luis Obispo faculty in 1998. His research interests include North American prehistory, hunter-gatherer ecology, and maritime adaptations. His area of geographic expertise is the central California coast, where he has conducted field research for the last 35 years. He is actively involved in research on a number of issues related to the archaeology and ecology of prehistoric California including: the impacts of late Holocene droughts on indigenous populations, the effects of human-caused extinction of the flightless duck (Chendytes lawi) on nearshore ecology during the Holocene, the prehistory of fishing on the central California coast, and possible pre-Columbian Polynesian contact with the New World. His most recently published books focus on the archaeology and prehistory of the Pecho Coast and Morro Bay in San Luis Obispo County.