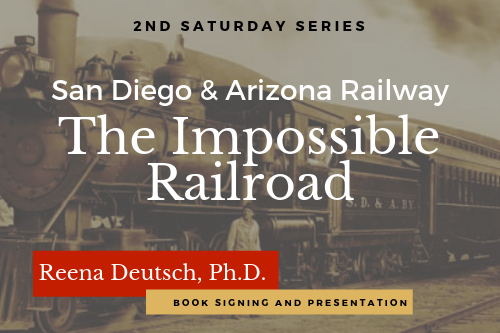 In the early 1900s, San Diego was a growing and thriving city, but with no rail transportation eastward. Spearheaded by John D. Spreckels, with his persistence and money, a railroad was constructed that engineers warned would be impossible to build. Starting in San Diego, the “Impossible Railroad” snaked through brutal mountain and desert terrain to connect with the transcontinental Southern Pacific in El Centro. It took 12 challenging years to build, but the 1919 completion was widely celebrated. This November is the 100th anniversary of the completion of the San Diego and Arizona Railway which still operates along parts of its 148-mile route. Author Reena Deutsch will give an account of the line’s dramatic history through vintage photos and gripping narration.

After stumbling upon old railroad tracks in our local desert, Dr. Reena Deutsch researched the colorful history of John Spreckels’ San Diego and Arizona (Eastern) Railway and has given dozens of lectures and wrote a book on it. Prior to retirement, Dr. Deutsch was a UCSD medical researcher. She currently serves as Board member for the Anza-Borrego Desert Natural History Association and Balboa Park’s San Diego Model Railroad Museum. This year, she is collaborating with the Pacific Southwest Railway Museum Association to celebrate the 100th anniversary of the completion of the San Diego and Arizona Railway.

Registrations are closed for this event