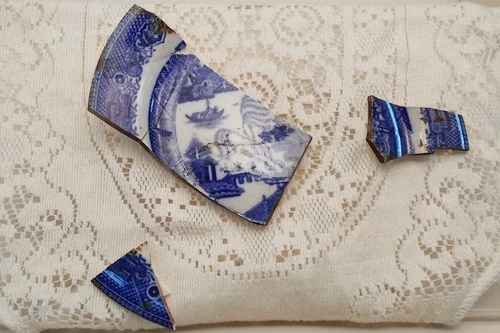 This Staffordshire Blue Willow pattern plate dates to circa 1900. Archaeologists recovered this artifact from Block 112 in Downtown San Diego. This section of San Diego housed a working class population during the late Victorian period (c.1880-1915).

Chinese-inspired patterns became very popular in England in the late 1700s. The exact moment of the Blue Willow invention is not certain. Engraver Thomas Minton is though to have engraved versions of willow designs for Spode and for various other factories around 1790. In order to promote sales of Minton’s Willow pattern, various stories were invented based on the elements of the design. The story is actually English in origin and has no links to China. The story was first published in 1849 as “The Story of the Common Willow Pattern Plate” in the magazine The Family Friend.

Artifact of the Week: Daguerreotype Frame

From Inside the Vaults: Artifact Handling