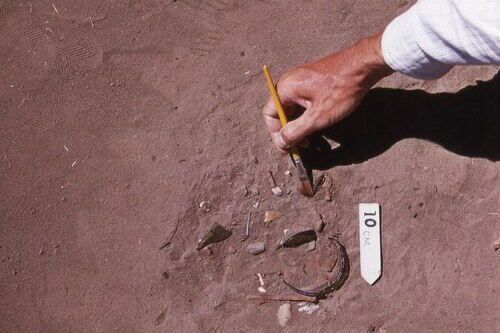 After digging deeper into what archaeology is last month, you now know that archaeology is the study of human history, prehistory, and past cultures through the excavation of sites and the analysis of material remains. An artifact is an object that was made or used by a human, while ecofacts are objects that indicate human activity, like an animal bone that has signs that it was used for food. So archaeology is the study of artifacts or material remains that were left behind by previous generations. Artifacts and ecofacts become buried over time, and archaeologists must recover them carefully so that they can be identified and studied.

What Tools Do Archaeologists Use to Recover Artifacts?

Generally during an excavation, an archaeologist’s tool box consists of some basic tools regardless of the type of excavation. Shovels, trowels, spades, brushes, sieves, and buckets are some of the more obvious or common tools that an archaeologist may carry with them to most digs. Keep in mind that the tool types used may vary depending on the type of excavation. More delicate excavations can require precision tools, such as blades, dental tools (like those picks they use to dig in between your teeth!), and small brushes that will give the archaeologist more control. Excavations that are large may require larger tools like a bulldozer to remove soil that is obstructing the dig site. The type of soil does also plays a factor in which type of tools will be used for a dig as do the size and location of the site. When surface artifacts are found, flags may be used to mark the spot that they are discovered. Cameras and photo scales are used to help document the findings.

A tool that is universal and probably the most used by archaeologists is a simple pointing trowel. This type of trowel is flat, and used to scrape dirt away from artifacts in a very controlled manner, unlike a gardening trowel which has a scooping shape and could end up digging unwanted holes during the process of soil removal. During the removal of each layer of dirt, notes are taken in a field notebook or journal and photographs are also taken to document each step of the process. Soil that is removed during this process is collected in buckets or a wheelbarrow, and taken to be screened for smaller artifacts that may be hiding within the dirt.

What Tools Do Marine Archaeologists Use?

Marine archaeologists use similar tools to land archaeologists, such as hand trowels, square units, clipboards, pencils, and tape measurers, but they also use tools that are much different. For example, hoses are used to collect samples from underwater sites for sifting. As technology advances, so do the tools used to uncover mysteries of past generations. Marine archaeologists may use an exosuit for underwater digs. This is a mechanical suit allowing archaeologists to dive deeper and stay down longer, allowing them to uncover artifacts that have previously been untouchable.

What Tools Do Archaeologists Use to Survey Sites?

In addition to tools used for excavating, archaeologists also use a variety of different tools during the survey process while searching for sites. Traditional and electronic compasses, tape measuring units, and GPS devices are some tools that may be used. A more advanced tool that many archaeologists use is called a Total Station Theodolite. This is an electronic tool used during a survey that measures distance, slope, angles, and the elevation of a feature at an archaeological site. GIS (geographic information systems) has been a tool used by archaeologists for the past few decades that assists with recording and collecting data, mapping sites, and even with the prediction of archaeological sites.

Archaeologists use many different tools when surveying and excavating sites. It all depends on which ones are needed on a specific dig and the tools are only getting more advanced as technology expands. Come back next month to dig even deeper and explore how archaeologists know where to dig in the first place!

Artifact of the Week: Chinese Dinnerware

Dig Deeper: How Do Archaeologists Know Where to Dig?