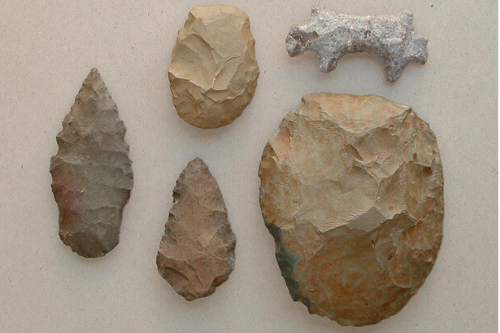 Now that we understand how archaeologists know where to dig and find archaeology sites, let’s dig deeper and learn about how it is possible to know who made the artifacts that are uncovered during an excavation. There may be many artifacts discovered at one site during a dig and it is the archaeologist’s job to figure out if all of the artifacts were made and left behind by the same people or if different cultures and time periods are being represented at an excavation site. Sometimes a written record may give some indication of the cultures represented but there may still be many unanswered questions. Without a written record (which is the case with many prehistoric sites) archaeologists must use the physical clues that were left behind to interpret and determine where the artifacts came from.

Context is one of the more important concepts to understand in archaeology. The relationship between artifacts, time, their frequency, and the methodology used for an excavation can give archaeologists important information about the site as a whole. For example, if a chipped stone tool and a grinding stone made of similar raw materials are found at the same depth, and found multiple times throughout a site, then it can be assumed that those tools were made and used by the same group of people. This is why it is incredibly important to leave artifacts where they are if you were to come across one. Even if you pick up and turn the artifact over to a ranger, the artifact loses context because it was removed from its original location and cannot be analyzed properly in relation to the other artifacts found at a site.

By the time an excavation happens, regardless of human interaction and disturbance, many artifacts have been destroyed by time or nature. This makes the clues that do survive even more valuable. Archaeologists even must consider the possible missing artifacts to tell a more complete story and develop theories about the possible cultures being represented at a site.

When artifacts are found together frequently and are determined to come from the same time period, this is called an assemblage. Assemblages are usually associated with a specific culture. Archaeologists may not know where the people from the specific culture came from, or something as important as the language they spoke, but the similarities found in an assemblage can indicate what people were doing during a specific period of time. Assemblages are given names based on the types of tools found, the location where they were discovered, or the time period associated with an area.

There are over 20,000 archaeological sites in San Diego County. Cultural heritage and resource laws have made it possible to carefully preserve and excavate these sites, allowing archaeologists to form theories, do research, and come to conclusions based on context and assemblages. The materials found at one site can inform archaeologists about similar materials found at a different site, giving insight into the peoples and cultures that came before and how they moved about the region.

Come back next month to dig even deeper and explore how stone tools are made!