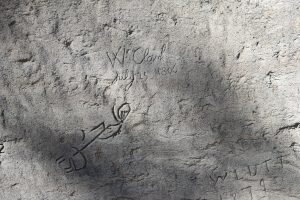 Pompey’s Pillar National Monument, MT – Photo by Jim Royle
Pompey’s Pillar is an outcrop along the route of the Lewis and Clark Expedition, along the Yellowstone River east of Billings, MT. There are numerous other petroglyphs present but this historic petroglyph, carved by William Clark, is the only remaining physical evidence of the expedition anywhere along their route. Clark named the outcrop for Sacagawea’s son, whom he nick-named Pompey.