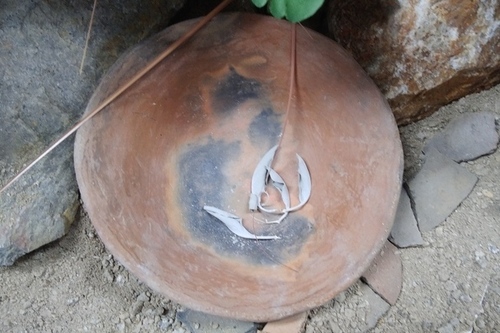 Pottery is the first synthetic material that humans made. Essentially artificial stone, pottery is a mixture of clay, water, and temper, transformed by the application of heat.

Pottery first appears in the archaeological record of San Diego about 1,000 years ago. In San Diego, it is very difficult to tell when a particular bowl or pot was made, because people made them in the same shapes for hundreds of years.

The inhabitants of prehistoric North America did not use the potter’s wheel. Instead, they predominantly used the coil method to make pottery. With this technique a vessel is constructed using long strips or rolls of clay coiled in a spiral, perhaps built up from a slab base. The completed vessel is pressed together, smoothed, and scraped before firing.

Firing hardens the pottery through a process called vitrification, which fuses the minerals in the clay into a hard and durable substance.

From Inside the Vaults: Collections Management