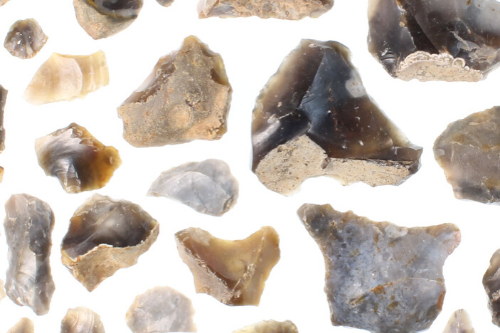 Now that we have discussed the different types and uses of stone tools and know how they were made, let’s dig deeper and learn about the waste left behind after a stone tool was created.

The prehistoric sites in San Diego County often contain many stone chips and flakes that are discarded during the production of stone tools. What are all of these stone chips? These chips and flakes are generally referred to as debitage. Debitage can be defined as the waste that is chipped away from the stone while making a tool. This includes flakes, shatter, and even dust created during the flintknapping process. In addition to the many stone tools preserved at the SDAC, the Center also collects and preserves debitage.

What Can Archaeologists Learn from Debitage?

Why would we want to preserve and collect discarded waste if it wasn’t “used” by its creator? When archaeologists are excavating a site, they may find debitage even if the tool created is nowhere in sight. Even if the tool is not found during a dig, debitage can tell archaeologists a lot about the tool, including where the stone originally came from. It also indicates important information about the people who created the tools.

By examining debitage, archaeologists learn a lot about the site. The size and type of the debitage may indicate the method that was used to produce the tool. An analysis of the type of stone used can give clues to who made the stone tool and when. Even the smallest chip can tell us where the original stone came from.

Obsidian is a great material for making chipped stone tools. It is a natural glass produced by the rapid cooling of molten rock. There is no source of obsidian found in San Diego County, yet many sites are littered with obsidian flakes, tools, and debitage. What does this tell us? This type of debitage, stone tool present or not, indicates that there was long distance trade happening in the area. Obsidian found in San Diego County is usually sourced from Obsidian Butte near the Salton Sea in Calipatria, Coso Range near the Nevada border west of Death Valley, and Baja California.

As we discussed last month, tool making changed with time and so did the materials that were used to produce them. If a tool is not present a site, but debitage was left behind, an archaeologist has a better chance at dating the production of the stone by analyzing the debitage and determining the type of stone. In San Diego County, these types of stone were generally tied to the dates associated with them:

It’s safe to say that debitage plays an important role in archaeology. Collections curated at the Center may have thousands of pieces of debitage in them. These artifacts are treated the same as stone tools, carefully counted,  weighed, and preserved for research conducted now and in generations to come.

We have learned about some techniques used to date sites and artifacts but is there a way to know definitively when something was made?  Come back next month to dig even deeper and learn about absolute dating!

Artifact of the Week: Debitage

Dig Deeper: How Are Stone Tools Made?