The San Diego Archaeological Center houses many prehistoric and historic collections from the San Diego County adjacent regions. The Center is equipped with over 5,000 square feet of vault space that allow us to provide long-term curation and care for a wide range of archaeological materials, including artifacts, ecofacts, maps, photographs, and site records. Partnering with local colleges and universities provides a setting for volunteers and students interested in archaeology to gain hands-on experience working with archaeological collections.

How Does the SDAC Acquire New Collections?

Most of the collections that are curated at the Center come to us from Cultural Resource Management (CRM) firms. These CRM firms work with developers around the county to make sure that construction is done using ethical and sustainable methods and that archaeological sites are protected and documented. Once their work is complete, CRM firms curate collections at the Center for long-term preservation and care.

What is in a Collection?

New collections delivered to the Center have many pieces. They must contain a site report, master catalog of curated objects, information about inadvertent discoveries, and other supplemental documentation such as field notes, maps, and photographs.

This project consisted of monitoring during the replacement of existing water and sewage mainlines with new lines. During the project, historic debris was observed, and diagnostic resources were collected. The soil was heavily disturbed, which led archaeologists and Native American monitors to determine that there was a lack of significance at this site and the project could move forward.

The isolate site, P-37-038123 contained one amber glass bottle, possibly pharmaceutical in nature, with an Owens-Illinois makers mark dating the bottle to between 1929 and 1954. The second is a colorless glass bottle from the same maker.

SDI-22522 had many glass bottles and fragments, ranging from pill bottles to condiment bottles, and even a glass deodorant bottle was collected. The bottles date from 1903 to present day, with a heavy concentration between 1930 and 1937. A reasonable amount of ceramic tableware was also collected, but unfortunately, none of the pieces had diagnostic maker’s marks.

This project was conducted to monitor the demolition and excavation of this site to make way for construction of a parking lot and residential spaces. Two previous archaeological investigations have taken place near this site. One of the structures that used to be at this site was an early 1900s automotive repair shop and dealership named the J.F McKnight building. It existed from 1918 to 1944 until it became the El Cortez Pontiac Company, followed by the Kasey Pontiac Company, and then the American Business College.

Archaeological resources found during excavation were recorded, and diagnostic artifacts were collected for analysis before being permanently curated at the SDAC. Diagnostic artifacts range from 1870 to 1920. The artifacts consist of mostly alcohol and liquor bottles, personal hygiene items, and tableware. Additionally, there were hardware, construction, and home décor items. Two sherds of Chinese Brown Glazed Stoneware and fragments of a celadon bowl were observed as well as precontact lithic materials, which indicate the presence of Chinese and Native American communities within this site.

This project included test excavations at four sites that had been previously recorded to determine significance of the sites. SDI-59 was originally recorded as a prehistoric camp site located near what we now call the Silver Strand. SDI-14414 was recorded as a likely prehistoric shell scatter, but no cultural resources had been observed there previously. Archaeologists observed that both sites have been heavily disturbed with modern debris (plastic, glass, and asphalt fragments).

During this project, a total of seven objects were collected from these two sites, including three lithic cultural resources, a historic artifact, and shards of mammal and fish bone.

This project was conducted in what is now known as Little Italy, and according to historic map review, there were five historic residential occupations identified in this project area. All five residences were demolished or reconstructed between the 1910s and 1940s and replaced by commercial and industrial developments. These residences were single-story and multi-family, likely constructed in the 1890s. Historic records indicate that the residences were occupied by many tenants from 1892 to 1909 including an attorney, a plasterer, a widow, a teamster, and many laborers. From 1913 to 1926, there were a foreman, a phone operator, and military members. More than 3,000 historic artifacts were collected from this site, glass and ceramic being the most common materials. 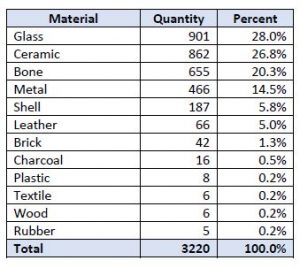 The chart above represents the types and quantity of materials collected during excavation.

This project is being developed for commercial and retail use in the Valley Center area of San Diego County. During the monitoring for this project, fourteen cultural resources were recovered from disturbed earth, including debitage, a hammerstone, manos, metate fragments, and ceramic fragments. Prehistoric use at this site was determined to be sporadic, mostly for temporary food processing and resource collection. Since there is limited water access near this site and minimal cultural resources were collected, it is doubtful that it was used much for food or lithic procurement.

This project consisted of excavation and recovery of archaeological materials during a residence modification. CA-SDI-39 is a large site that has been studied and excavated many times throughout the 20th and 21st centuries. It is called the Spindrift Site and has been determined significant according to CEQA and the City of San Diego. This site has been previously recorded as a prehistoric occupation complex spanning the Early Archaic to the Late Prehistoric cultural periods. This site is closely associated with marine resource that are present in the La Jolla bay area. Cultural materials recovered included cores, flake tools, manos, a pestle, debitage, prehistoric ceramic, faunal bone, marine shell, fire affected rock (FAR), brick fragments, nails, bottles and containers, a cosmetic jar, marble, tableware fragments, and saw-cut faunal bone.

The range of recovered artifacts from the Bush Residence Project allows archaeologists to identify this site as a primarily Late Period habitation site occupied circa 900 to 300 BCE.

This project consisted of excavation and recovery of archaeological materials in quantities that are sufficient enough to mitigate the impacts of the project on the integrity of the site. Excavation and recovery revealed that the sediments were heavily disturbed but that cultural resources and materials were sparse. Three radiocarbon dates indicate that the area is older than previously had been expected, dating back to 7,998 to 7,407 BCE. Even though this is a very old site, the lack of soil changes and cultural materials recovered here indicates that the area is not a significant. Anything that had potential significance was properly retrieved, analyzed, and used for scientific research.

Archaeologists think it is likely that this is a small, localized single deposit, disturbed habitation site dating to approximately 5,500 years ago with milling tools, steep edge unifacial tools, battered implements, bifaces (points and knives), flake tools, cores, unifacial rejuvenation flakes, debitage, and a small amount of shell.  The presence of these cultural resources indicates this site was used for a special purpose, likely short-term habitation used on a seasonal basis to acquire, process, and utilize seasonal resources.

Archaeologists conducted mitigation monitoring at this site and one historic brick house foundation feature and four isolated cultural resources were indentified, recovered, and returned to the lab for processing. They were able to associate this site with a historic residence situated here using Sanborn maps from 1906, 1921, and 1950. The portion of the foundation identified represents an expansion of the home between 1906 and 1921. Using historic aerial photographs, it was determined that the residence was demolished sometime between the years 1950-1953.

A glass cosmetic jar, decorative porcelain jar, and two soda bottles were recovered from this site. The cosmetic and decorative jars are likely from 1900-1920, representing household and individual residents. The two soda bottles, one Coca-Cola bottle and one 7-Up bottle were manufactured in 1956 and 1957. These items were recovered from the perimeter of the site and likely represent trash disposal by employees or patrons of nearby businesses.

Three hundred sixty-one cultural resources were recovered from the test excavations at CA-SDI-18428: 359 flakes (pieces of stone removed from a core) and 2 tools. Archaeologists on the project were able to conclude that the limited range of materials recovered indicates that tool production was not taking place on-site, but rather it was a place where final shaping and re-sharpening happened.

Thirteen cultural resources were recovered at CA-SDI-18429, all debitage (waste or byproduct of stone tool production). The material recovered was predominantly fine-grained metavolcanic. No tools, cores, or milling implements were found. Archaeologists concluded that this site was most probably used as a single use episode of locally available material produced for core preparation or tool re-sharpening.