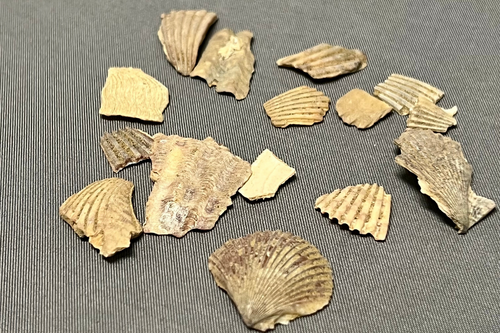 Take a behind-the-scenes peak at our most recently acquired collections in our virtual exhibit New Acquisitions. To accompany this exhibit, each month the SDAC social media and collections blog New Acquisitions: A Closer Look will further examine the collections that are being curated, the research value they provide, and the importance of archaeology in San Diego County.

The San Diego Archaeological Center houses many prehistoric and historic collections from San Diego County and adjacent regions. The Center is equipped with over 5,000 square feet of vault space that allow us to provide long-term curation and care for a wide range of archaeological materials, including artifacts, ecofacts, maps, photographs, and site records. Partnering with local colleges and universities provides a setting for volunteers and students interested in archaeology to gain hands-on experience working with archaeological collections.

How Does the SDAC Acquire New Collections?

Most of the collections that are curated at the Center come to us from Cultural Resource Management (CRM) firms. These CRM firms work with developers and homeowners from around the county to make sure that construction is done using ethical and sustainable methods and that archaeological sites are protected and documented. Once their work is complete, CRM firms curate collections at the Center for long-term preservation and care.

What is in a Collection?

New collections delivered to the Center have many parts. They must contain a site report, master catalog of curated objects, information about inadvertent discoveries, and, often, other supplemental documentation such as field notes, maps, and photographs.

The new acquisition SDAC 755 came into the Center in September 2022. This project was contracted by a landowner in the Otay Mesa area of San Diego County. The proposed project to build many industrial lots, road networks, and other related utilities required a multiphase survey and testing program to be completed by the contracted CRM firm, archaeologists, and Native American monitors.

In 2009 an archaeological study of the area found three significant sites that would potentially be impacted by the development. A data recovery program was required to mitigate these possible impacts. The data recovery did not take place until 2022. Updated survey, excavations, and analysis from the original study were conducted between May and August of 2022.

The existing environment is dominated by rolling hills and crossed by several seasonal drainages. Elevation was measured between 480 and 560 feet above sea level. “The project area is in a transitional region between the generally level Otay Mesa and the rolling hills and gentle slopes at the base of the San Ysidro Mountains to the north and east. This geologic area consists of a series of knolls and mesas that are interrupted by small canyons and drainages located in the Coastal Plains Physiographic Province. Much of this area is composed of Pleistocene and Upper Pliocene marine deposits, currently known as the Lindavista, Sweitzer, and San Diego formations (Biehler 1979). The San Diego Formation is composed of gray friable sandstone and conglomerate. The Lindavista and Sweitzer formations mantle most of the mesa tops. These formations consist of nearshore marine and non-marine sediments deposited on a wave-cut terrace, following the deposition of the San Diego Formation. The Lindavista Formation is composed of moderate, reddish-brown, interbedded sandstone and conglomerate, and the Sweitzer Formation is composed of brown, reddish-brown, and red, poorly sorted sandstone and conglomerate. The Otay River Valley, the major canyon bisecting Otay Mesa from east to west, is composed of Quaternary, non-marine terrace deposits and recent alluvium derived from rocks in the area. The juncture of the coastal plain and foothill provinces to the east is comprised of Plio-Pleistocene, non-marine deposits typically consisting of angular metavolcanic detritus. The hills to the north and east of the project are comprised of Jurassic volcanics, a collection of mildly metamorphosed volcanic and volcaniclastic rock formations, characterized by the Black Mountain or Santiago Peak volcanics (Biehler 1979). Santiago Peak Volcanics are represented throughout this area of San Diego County by outcrops of basalt and fine-grained, green metavolcanics known locally as felsite. The project also includes a variety of soils. The lower elevations consist of alluvial clays and sands indicative of a floodplain. The soil in the upper elevations consists of clay mixed with pockets of bentonite and/or cobbles and mostly comprised of granite, basalt, and quartzite. These lithic materials, generally hard and extremely resistant to erosion, were preferred by the prehistoric inhabitants of the San Diego region for the manufacture of flaked tools and grinding implements (Smith 1991; Robbins-Wade 1990).” (Project report, p 1.0-5).

The property was vacant at the time of data recovery but has been used for farming and cattle grazing in the past, introducing weeds that contribute to a poor surface visibility. This poor surface visibility led to the need for multiple surface surveys during the past project phases. During the 2022 phase, a subsurface investigation took place. Five one-square-meter data recovery units were excavated. “All five data recovery units were excavated in decimeter levels to a minimum of 30 centimeters and were terminated when the recovery of cultural materials dropped significantly and ceased for multiple levels of excavation. Across the site, the units appeared to be stratigraphically homogeneous. The soil from all units may be characterized as a light brown (10YR 6/3) sandy loam from zero and 30 centimeters in depth, followed by a compact brown (10YR 4/3) sandy clay between 30 and 50 centimeters. Bioturbation and modern debris were noted within the units and across the site. Table 4.1–1 provides the soil descriptions and encountered disturbances for the excavated units.” (Project report, p. 4.0-5)

Because the initial project survey was conducted in 2009, an updated survey was completed to determine if any changes had occurred in the passing 13 years. Two of the three sites that were deemed significant have been impacted by a development of the property north and west of the current project boundary. This led the archaeologists and researchers to request project reports for the developments that impacted the related sites. The report stated that archaeologists recovered a small number of artifacts and that they seemed to have missed core areas of research that had been laid out in the 2009/2010 studies. Unfortunately, this led to the development of these areas without the appropriate mitigation measures and data recovery.

Original work at SDI-8081 included five surface scrapes and the shovel test pit excavations of fifty-two units. Significant cultural deposits were recovered down to sixty centimeters along with a large shell midden deposit. Archaeological analysis of the recovered ecofacts and artifacts indicate “that site activities were focused on the procurement, processing, and maintenance of lithic tools. The depth and density of recovered ecofacts indicate that shellfish resources were processed and consumed at the site and represent prolonged occupation.” (Smith, ix)

“The initial laboratory analysis of the Phase I data recovery results recovered one piece of debitage and 175.86 grams of shell. The sample demonstrates a shallow, disturbed deposit with a narrow range of prehistoric artifacts and lithic types. The results of Phase I of the data recovery program for CA-SDI-8081 indicate that the site has been highly impacted by the 2017 development. All Phase I units were selected for review in order to determine redundant levels of cultural materials and site patterning, both horizontally and vertically across the site. The Phase I investigation of Site CA-SDI-8081 within the project indicates a comparable frequency of cultural materials across the site, which indicates a marked level of redundancy across the four positive data recovery units.” (Project report, p. 3.0-9)

Chione sp. accounted for the largest portion of the shell recovery, with Argopecten, Ostrea lurida and Mytilus sp. also present. Of the species that were analyzed, most are found in coastal bays and sandy beaches, alluding to the fact that while shellfish may not have been a large part of the inhabitants’ diet, that they did travel to the coast regularly for resource extraction.

The debitage recovered was a single metavolcanic specimen that provides evidence of nodule core reduction occurring at the site.

First recorded as a moderate lithic scatter in 1974, then updated to a habitation site in 1991, site SDI-8081 is labeled as a resource extraction and processing/temporary habitation site.

To learn more about this collection or if you have any questions regarding the acquisitions at the Center, please email collections@sandiegoarchaeology.org.

Come back next month as we take a closer look at SDAC 756, a project with additional findings near this project area!

The following report was used for the analysis of this collection: 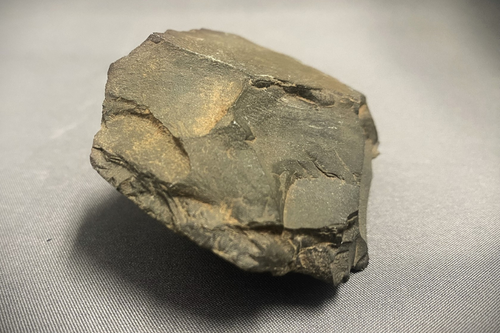 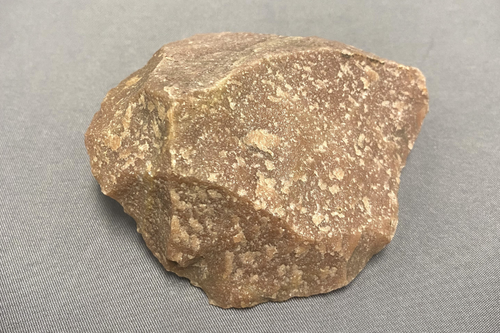 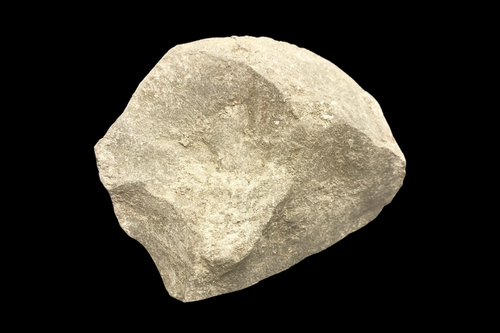