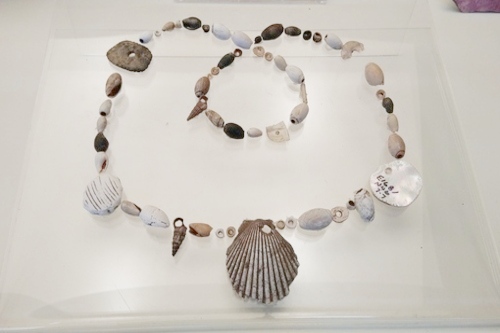 Throughout history, humans have adorned themselves. These beads came from archaeological sites all over San Diego. The shell beads are made of olivella, abalone, clam, scallop, and dentalia. The grooved stone bead is made of steatite.

During the Late Prehistoric Period, baskets and pottery first began to be made in San Diego. Local inhabitants made cordage for fishing line, and they created carrying bags and rope from yucca and other plant fibers. Although rarely preserved in the archaeological record, the woven fragments that do survive demonstrate inventive methods to produce practical and decorative goods for immediate use and and for trade.

There is evidence of widespread trade during the Late Prehistoric Period. The exchange of prized foods and other items between local groups and between tribes was a way to procure material not available in this area, as well as to cement relationships.

Artifact of the Week: Bone Awls

Artifact of the Week: Arrow Points