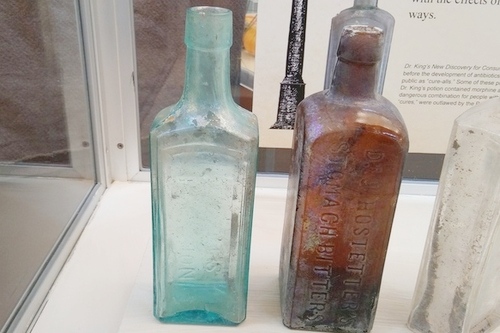 Northern European fishing communities used cod liver oil for generations to restore health and alleviate aches and pain before the doctors and the alchemists of nineteenth-century Europe began to take an interest. Cod liver oil was derived from fermented fish livers and had an exceedingly unpleasant smell and taste.

In 1873 Alfred B. Scott came to New York City and began experimenting to produce a less nauseating preparation of cod liver oil. Three years later, Scott’s Emulsion was available. Cod-liver oil’s false reputation as an effective treatment for consumption (tuberculosis), a leading cause of death in the nineteeth century, led to its widespread popularity. Cod liver oil did contain vitamins A and D, which may have improved the health of some. By the 1920s, with the discovery of germ theory and vitamins, cod liver oil waned in importance.

Artifact of the Week: Antiseptic Bottle