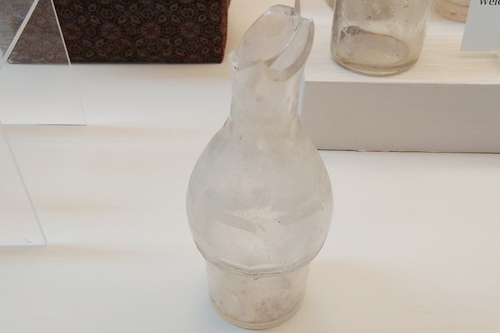 This etched glass cruet is from a Victorian cruet set. Diners used the small container to serve condiments like oil and vinegar at the dinner table. Archaeologists recovered this artifact from Block 112 in Downtown San Diego.

This section of San Diego housed a working class population during the late Victorian period (c.1880-1915). A sudden population boom in the 1880s led to the densely packed urban environment that is seen in Block 112. The mission for the destitute, tenement, lodging house, and shared dwellings were typical of inner-city living. Block 112 was located just three blocks from the dockyards and the notorious Stingaree District with its disreputable establishments, including saloons, opium dens, and brothels. Despite their poverty, the people who lived on Block 112 enjoyed a wide range of consumer goods, such as the cruet set.

From Inside the Vaults: Deaccessioning Museum Collections