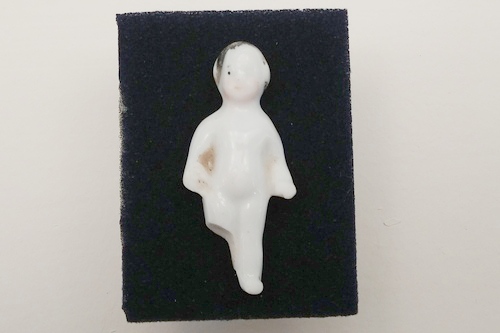 Frozen Charlotte is a name used to describe a specific form of china doll made from c. 1850 to c.1920. The dolls had substantial popularity during the Victorian era.

The name Frozen Charlotte came from an American folk ballad Fair Charlotte, which was attributed to William Lorenzo Carter. The song was inspired by the poem Young Charlotte written by Seba Smith after he read a true story in the New York Observer. “A young woman…was frozen to death while riding to a ball in a carriage on Jan 1, 1840.” She froze to death because she did not want to cover up her pretty dress.

The Frozen Charlotte doll is made in the form of a standing, naked figure molded as a solid piece. The dolls are also sometimes described as pillar dolls, solid chinas, or bathing babies. The dolls ranged in size from under an inch to 18 inches plus. The smallest dolls were sometimes used as charms in Christmas puddings. Smaller sizes were very popular in doll houses. Occasionally, versions are seen with a glazed china front and an unglazed stoneware back. This enabled the doll to float on its back when placed in a bath.

Frozen Charlotte dolls were popular during the late 19th and early 20th centuries in the United States. Smaller versions of the dolls were also known as penny dolls because they were often sold for a cent. Most were made in Germany.

Artifact of the Week: Harmonica Piece