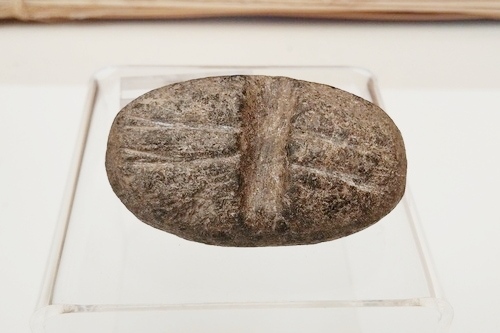 The shaft straightener was used to gently bend prepared and heated wooden sticks to create an arrow shaft that would fly true. It is a flattened round stone with a groove pecked in the flat surface.

To create that groove, flintknappers use a percussive technique called pecking. This method involves battering a granular rock with a hammerstone to form an intended shape by removing very small chips.

The Late Prehistoric Tradition introduced the bow and arrow to the region. They hunted deer, antelope, large hares, and small rabbits. However, the principal means of catching rabbits was to form a line, beat the bushes, and entrap the rabbits in a long woven snare. Local inhabitants also used the rabbit stick, thrown somewhat like a boomerang to bring down a running hare.

Artifact of the Week: Arrow Points

Artifact of the Week: Cooking Stone