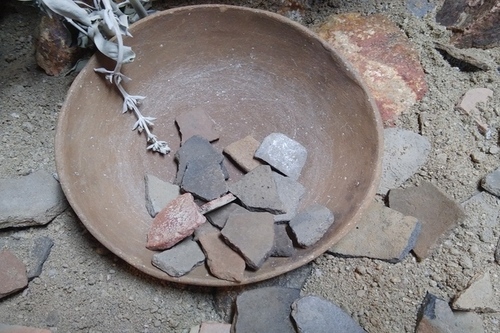 Indigenous peoples of Southern California have been creating and pit-firing clay pottery for thousands of years. Prehistorically, two pottery wares were constructed in the region. The inhabitants of the peninsular mountains produced Tizon brown ware while people in the Colorado Desert created Colorado buff ware. Both were produced by the paddle-and-anvil technique and fired in low-temperature open pits. So why are they different colors? The local clay from which they are produced contains distinct amounts of minerals and water, thus creating the color variation.

Archaeologists find this plain unglazed ware in the mountain and coastal regions of San Diego County. Tizon is medium brown with black “clouds” from firing. It has a coarse texture with shell, ground pottery, quartz, feldspar, or mica incorporated in the clay as temper. (Temper is material added to clay to reduce rapid shrinkage or expansion and to distribute heat more evenly during firing.)

Indigenous peoples made this pottery from clays found in former lake bottoms and alluvial desposits of the Coloroado River in Imperial County. It is cream-colored, unglazed buff with a with a pinkish cast. Thinner and harder than Tizon, buff ware includes gypsum (salts) which may give it a “scum” or dusty appearance.

To learn more about local pottery, visit the exhibit The Life Cycle of a Pot currently on view at the San Diego Archaeological Center.